Report an Error on this page

Report an error on this page

Use Your Hero Unit

Use Your Topbar Abilities

Adapt to the Enemy Composition and Map

Expand As Fast As Possible

Queueing up several units/structures, and overproducing structures can tie up vital resources you need, especially during the early stage of the game. For example: 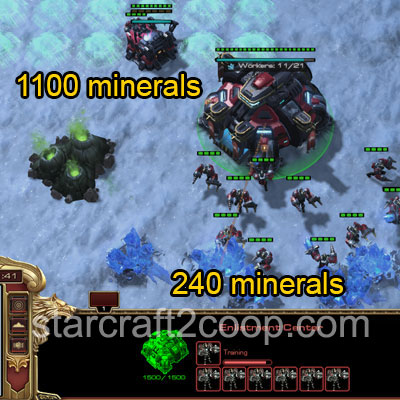 In the image above, the six queued up Laborers account for 240 minerals spent that isn't being used. Additionally, the 11 queued up Supply Bunkers costed 1100 minerals, but none are being built. Most of all, the player will be unable to use all that extra supply. In total, the 12 Supply Bunkers account for 144 Supply - too much supply to be utilized. Build only what you need, and spend the rest of your resources teching up and making your army larger.

Additionally, make sure you will have adequate resources to spend once the structure is complete. For example, don't build Tech structures if you do not have the gas to spend to use it.

Your minimap provides you with critical information throughout the course of the mission. Use it to evaluate your position and what is going on around the map.

Use Your Hero Unit

Certain commanders (such as Kerrigan) spawn a Hero unit. These Hero units are extremely powerful and should be used as much as possible, especially during the early game. They provide the player with early-game power to allow them to push and complete objectives, while macro'ing up at the back to tech up and gain access to high-tier units.

Use Your Topbar Abilities

Topbar Abilities provide players with a large amount of power throughout the course of the game. Use these Topbars to help you push and take engagements. They should be used as soon as they are off cooldown, as frequently as possible. You can time your pushes to line up with when powerful Topbar abilities come off cooldown.

Adapt to the Enemy Composition and Map

It is important to learn the units that make up various Attack Waves that will attack players. Check the Enemy Compositions page to learn about the various enemy compositions in the game. Use that knowledge to build an army that directly counters that composition while allowing you to push and complete the objectives in the game.

Enemy bases can seem very intimidating, discouraging players from pushing in when they're not required to do so. However, playing aggressively can make missions easier by providing players with access to enemy wave spawn points. Players can then use Topbar abilities (such as Abathur's Toxic Nests) to spawn-camp attack waves.

Rapidfire binds the selection of a skill (through its hotkey) and its targeting to the same hotkey. This means in order to cast a skill, you need to press its hotkey once (to select it) and then once more to target it at your cursor's current position.

Rapidfire has its advantages, because it allows you to cast skills in quick succession. This is very important for commanders like Alarak, who depends on Rapidfire for his Ascendant abilities. Without Rapidfire, skills like Mind Blast would be ineffective due to the high amount of clicking required.

Rapidfire cannot be bound in-game. You will need to manually edit the hotkey settings file in order to do so. This is because the game can only bind one key to Rapidfire. Generally, you'll want a lot more to make it effective.

You will see a [Your Username].SC2Hotkeys file. Open it in Notepad. If you do not see the file, make sure you have created a custom hotkey profile in-game first.

Under the [Hotkeys] section, add the following line:

Once you save the file, you would have bound the "Z" key to rapidfire. To test it, play Protoss, and warp in a Zealot (assuming other hotkeys are default). But instead of clicking the location you'd like to warp the Zealot in, just press the Z key again. The Zealot will be warped in.

You may add as many keys as you'd like, separated by commas to the "TargetChoose" setting to bind additional keys to Rapidfire.

A video on Rapidfire is below:

Expand As Fast As Possible

Some missions in co-op have uncontested expansions, while others might be guarded. Regardless, you should always aim to take your expansion as quickly as possible. Certain commanders (like Mengsk) have ways of capturing expansions unusually early in the game (these are called "Fast-Expand Techniques"). Learn them to strengthen your early-game economy. If you are playing Terran, pre-build your Expansion Commander Center and float it over once you clear the defenders/rocks.

In Versus games, armor is a critical part of a player's macro, as without it, they end up taking much less efficient trades in battle. However, due to the unique nature of Co-op, armor upgrades are not that important because:

There are some cases where a player should invest in armor upgrades, such as:

A video that explains this in more detail is below:

Checking creep for the presence of Zerg can allow you to adjust your opening to better counter the potential attack waves you will face at the start of the mission. Press Alt+T. This changes the minimap to a Terrain view. If you see creep, you'll be facing a Zerg composition. If you don't see creep, you'll be facing a Protoss or a Terran composition. The below image shows you an example: 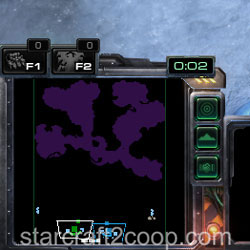 Note that for Scythe of Amon, creep will always be present. However, the positions of the creep will allow you to uniquely identify which enemy race you'll be playing against.

In Co-op, knowledge of the game mode can significantly reduce the challenges that new players face. While some interactions between Co-op mechanics are rare, good Co-op players should at least be aware of:

In Co-op, Point Defense Drones and Point Defense Missiles frequently appear, which can affect your effectiveness in a mission, especially when dealing with Mutators. It is important to be aware of what Hitscan and Projectile attacks are and what the difference between them is.

These terms refer to the types of attack a unit has and may be a factor in unit selection against certain mutators such as Missile Command.

In short, a Hitscan attack deals damage as soon as it is fired. A Projectile attack has a physcial projectile that must travel to its target to deal damage. For more details on the differences, you can watch the video below: