Emperor of the Dominion

Mengsk uses an army of conscripted workers and soldiers to bolster his defenses backed up by powerful units from his Royal Guard and Artillery fire from the large distances.

The calldowns for Mengsk, at level 15, with no mastery points added are:

Prior to gaining access to Earthsplitter Ordnances, Mengsk levelling can be extremely difficult, as it makes it impossible for him to take engagements without losing his army. Once Ordnances are unlocked, they should be used to weaken enemy bases and attack waves before pushing in. Shock Divisions should be used to provide damage, with Troopers in the front to keep enemy units off them.

Below are the three Power Sets for Mengsk with the recommended point allocations for each. Note that these are meant to serve a general, all-purpose build that is effective across all maps with no Prestiges selected. You are highly encourged to change these masteries to suit your playstyle and particular challenges you face (e.g. Weekly Mutations).

Given the varied playstyles, the Laborer mastery is a better pick here because it provides a benefit regardless of the playstyle used, allowing the commander to be effective on all maps.

If the player chooses to use the Dogs of War ability frequently (and potentially in fast expands if they struggle with the multitasking), the Terrible Damage would be a more beneficial pick for them. Otherwise, the Royal Guard Cost is the better choice here as it allows you to directly strengthen your army.

The Starting Imperial Mandate is the better choice here because it provides Mengsk with access to two Supply Bunkers at the 2 minute mark, allowing him to fast expand and build his economy.

Below are the prestiges for Mengsk. Note that "Effective Level" is the level at which the prestige achieves it full effect.

All of Mengsk's prestiges are viable, depending on the player's preferred playstyle. However, for general play, Merchant of Death offers Mengsk the versatility in being able to deal with a wide variety of situations. While upgraded troopers are slightly more expensive, they pay back in dividends by increasing your overall effectiveness in trading with Amon.

The recommended army composition for Mengsk is below. Note that this assumes no Prestige talent selected and recommended Mastery Allocations. This is a basic recommendation for your army framework. It is recommended to gain an understanding for each of the units in the Units section and further add tech units so that you are able to better handle the situations you face.

A mix of different trooper types is important. Assault Troopers deal damage while Rocket Troopers handle air units with ease. The ratio of each will depend on the enemy composition and map objectives. Use Aegis Guards to tank for the troopers and Imperial Intercessors to heal damaged units. Tech up to a Pride of Augustgrad for powerful wave-handling abilities. Remember to put Imperial Witnesses into Patriot mode for extra buffs to your army.

Mengsk's combat units are listed below:

Below is the standard economic build order for Mengsk. For more information on how to read and construct your own build orders, please check the Build Order Theory page.

Weapon upgrades for Troopers may seem expensive, but they can greatly increase the unit's performance in combat. Make sure to utilize any floating minerals to upgrade Trooper weapons where possible.

Finally, it can be very tempting to try and build many of the Royal Guard units. Doing so means that the experience you get from kills is split among more units, slowing down their levelling up through Ranks. While for smaller units (such as the Aegis Guard), it might not be too impactful, it can be very problematic for larger units such as the Pride of Augustgrad. These units gain a significant power spike at Rank 3 and is potentially the rank where they become invaluable. Having several Prides of Augustgrad, combined with their high levelling experience can prevent a player from reaching the rank which makes them important units.

Mengsk's Royal Guard units have a Veterancy mechanic that allows them to level up as enemy units are killed around the map. Once a certain amount of experience is reached, the unit ranks up, gaining access to additional skills or bonuses. The leveling up mechanics works as follows:

Mengsk can send multiple Laborers to build a structure. The time taken to complete a structure based on the number of Laborers building is as follows:

With 30 points into the Starting Mandate Mastery, Mengsk has access to one of the following listed combinations of calldown usage once he hits 50 Mandate, which is when double-Bunker expands begin. Single bunker expands can be done at the start of the game.

Below are pictures that show how to fast-expand on maps. These require a lot of practice to pull off, but can put you ahead economically.

*Due to how lightly this mission is contested, only one Bunker is required, allowing you to place your second Bunker at your main, unloading, and converting the Troopers to Laborers to further saturate your main mineral line.

Earthsplitters are a key part of Mengsk gameplay. They are used to soften attack waves and enemy bases, allowing Mengsk's more fragile army of conscripts to take more favourable engagements. Mengsk's Earthsplitters have the following upgrades available to them:

In addition to upgrades, loading conscripts (either Troopers or Laborers) into Earthsplitter Ordnances increases the number of artillery volleys by one per each loaded conscript in every 30 seconds. The table below summarizes this information:

Earthsplitters have an element of randomness to them. Upon selection of an area of bombard, an Earthsplitter will randomly select one area of 3 units radius that is within 7.5 range of the selected area. Before the strike, vision of 4 radius will be provided. The Earthsplitter will deal 100 damage in that area on impact. The image below shows the approximate sizes involved: 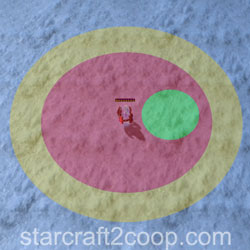 The areas denoted in the picture above are as follows:

The table below provides calculated data on various probabilities of the Artillery bombardment with different numbers of Earthsplitters. The measured parameters are:

The table below shows probabilities and expected number of hits on targets of various sizes per volley. For reference, the following objectives' radii are provided:

Note that if a unit's radius is 4 or above, the artillery is guaranteed to hit it with each volley.

If you are interested in learning more about how this data was generated, you may watch the video below:

Mandate is the Mengsk equivalent of energy that some of the Protoss commanders have. It is generated by increasing your "Imperial Support". The amount of total Imperial Support, divided by 240, gives your Mandate generation per second. Imperial Support is created in three ways:

The below videos demonstrate the various fast expands explained earlier. Note that as of patch 4.11.3, Mengsk's Starting Mandate Mastery has been modified which means the two Bunkers cannot be dropped at the start of the game. For double Bunker expands, you will need to wait (~2 mins) before both Bunkers can be placed. For single Bunker expands, the mineral line will not be saturated at the start of the game.