Stetzones provide bonuses for any of Stetmann or his ally's units that stand in them. Each Stetellite will spread a Stetzone within 8 range from itself. A Stetellite can only be deployed within a Stetzone. The Deploy Stetellite Ability is shown below:

Stetzones can be operated in three different configurations. Configurations can be switched every 1 second, so changing configurations frequently is a key element of Stetmann's gameplay. These modes are listed below:

Below are the three Power Sets for Stetmann with the recommended point allocations for each. Note that these are meant to serve a general, all-purpose build that is effective across all maps with no Prestiges selected. You are highly encourged to change these masteries to suit your playstyle and particular challenges you face (e.g. Weekly Mutations).

Super Gary can be an extremely powerful unit when used correctly, providing Stetmann's army with instant mobility, buffs and a strong AoE attack to deal with attack waves. Having access to these abilities more often is a better choice.

The points recommended here are a starting point for players. A player's playstyle will determine what split they prefer to use. A 8/22 split is optimized for Roach-style play. A 30/0 split can be used to keep all options viable.

Stetmann naturally floats many minerals which can be used to place Hatcheries around the map to spread Stetellites from, reducing the need for allocating points into the Stetellite mastery. Therefore, the Structure Morph mastery is the better choice here.

Below are the prestiges for Stetmann. Note that "Effective Level" is the level at which the prestige achieves it full effect.

Best Buddy is the prestige that outshines the rest here, by providing a huge power level increase to Super Gary, with very minimal downsides. Pre-level 5, Stetmann should be using Signal Savant, as it offers no downsides. However, past level 5, Best Buddy should be used if it is unlocked, with a big focus on the hero unit, to reap the power of the prestige. 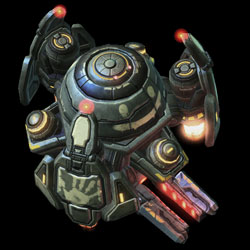 The abilities for Gary are:

For a cost of 450 Minerals/300 Gas, Gary may be upgraded to Super Gary, with an extra ability charge (except for Gary-Zone) and a new ability. The abilities for Super Gary are:

The recommended army composition for Stetmann is below. Note that this assumes no Prestige talent selected and recommended Mastery Allocations. This is a basic recommendation for your army framework. It is recommended to gain an understanding for each of the units in the Units section and further add tech units so that you are able to better handle the situations you face.

Using Zerglings to tank for Hydralisks, Stetmann should be able to handle almost any enemy composition without any issues. Attack wave should first be engaged with Super Gary before attacking with your army.

If dealing with a pure ground composition, Mecha Banelings are a great way of handling attack waves. Place them near spawn points if possible.

Stetmann's combat units are listed below:

Below is a order for Stetmann that rushes Super Gary out. This one assumes max mastery points into the Structure Morph mastery to ensure adequate resources to upgrade Gary as soon as he spawns. For more information on how to read and construct your own build orders, please check the Build Order Theory page.

Note that on some maps that are more defensive (for example Mist Opportunities), it may be better to delay getting the Super Gary upgrade and focusing on a more economic-centric build by take your expansion faster. As such, the build order will need to be modified accordingly. To learn more about how to construct your own build orders, please check the Build Order Theory page.

Whenever any of Stetmann's Mech units are killed under a Stetzone or within 15 range of Gary/Super Gary, a certain number of Mecha Remnants for a unit will be recycled to Stetmann. When a certain number of Remnants are recycled, a Mecha unit will be rebuilt at no cost at their respective unlock structures. Additionally, when Super Gary absorbs a Mecha Remnant, he gains 10% increased attack speed and regenerates an additional 1 life per second for 30 seconds. This can stack up to 20 times. The table below summarizes which Remnants are dropped from each unit.

The table below lists out the required count of Mecha Remnants to produce a full unit.

A common trap for Stetmann players is to ignore the power of Stetzones and take engagements outside them. This can severely reduce their army's effectiveness in the mission. Additionally, switching Stetzone types is part of the gameplay, and continuously using a single Stetzone type is inefficient.

Additionally, some players may choose to cover their ally's base in a speed Stetzone. This should not always be done. Players will need to consider a number of factors: